Is it effective against sick house syndrome?
A
There is a high effect.

The cause of sick house syndrome is volatile organic compound gas (VOC gas).

The photocatalyst decomposed/detoxifying harmful gases as well as deodorizing effects.

In the case of a new house, there is no problem basically because building materials are adopted after strict inspection, but there are many cases where a sick house develops after entering, and the cause is said that imported furniture or sofas etc. However, VOC gas that has volatilized once adsorbs in the room, and then it gradually diffuses and affect the human body. If you coat the whole room with a visible light reaction type photocatalyst before moving in, it is safe because the emitted VOC gas continues to be decomposed. However, it does not work in a state where the light does not enter and shutting the door, window completely. Immediately after entering a new house, ventilate well, open the curtains and receive light as much as possible to maximize the photocatalyst activity.

What is Photocatalyst?
A
What photocatalyst is, when the titanium dioxide receives energy from light such as the sun or room lighting, electrons (-) are released from the surface. The electrons released are combined with oxygen in the air then creates “O2-” (Superoxide anion). The surface where the electrons were released is tinged with the electric charge of plus, and takes electrons from moisture of the air and then return to its original state. On the other hand, the moisture that lost the electron becomes a hydroxyl radical (•OH). These two kinds of strong oxidative decomposition, which decompose organic compounds such as mold, moss, oil, etc, causing dirt. In addition, in case of inside, it has an environmental purification function that can decompose and remove odors, bacteria, viruses, etc, and harmful substances, gas, cause of the sick house syndrome. This action occurs repeatedly when the light receives, and the photocatalyst itself does not change. In other words, photocatalyst is that “it decomposes various harmful substances, a odor, dirt, etc. by receiving light and keeps continuously good environment”.
What kind of substance is Photocatalyst?
A
It is known that there are many substances which has a photocatalytic effect. However, the most reactive substance among them is "titanium oxide". Most of the photocatalysts currently used around us are "titanium oxide".
How long does an effect continue?
A
The feature of the photocatalyst is that it has a self-cleaning function using natural light and rainfall without using any energy such as electricity. Light and rain are indispensable for this function to work well. Also, if the decomposition amount does not exceed the amount generated, dirt will gradually accumulate. This is largely related to structural problems, for example rainwater repeatedly passes through the same place, or water is pooled in narrow gaps then it is hard to dry circumstances, etc. Dirt may occur partially due to various factors. However, most of them are prevented dirt by the photocatalytic function, so you can keep beautiful appearance with partial maintenance.
How much does it cost?
A
The coating cost of the Palccoat is cheaper than a general paint. When there is a scaffolding for general painting for exterior wall, and a large-scale repair of an apartment, you can request it together and it will be cheaper. The “Palccoat Group” provides customers with reasonable prices and beliefs in order to spread the general public, energy saving, ecology, and excellent “photocatalyst technology” from Japan. Furthermore, the effect guarantee five years and confidence in quality are proof of trust (guarantee five years is only for exterior coating).
Is it effective against The wall of the north side?
A
The PALCCOAT MOLD (mold control powerful type) is responsive to infinitesimal amounts of ultraviolet light. Ultraviolet rays also reach the north side where light does not receive. The picture below is, we observed by spraying over the green algae growing on the north side of the house. As you see, it takes time, but it is gradually decomposed. 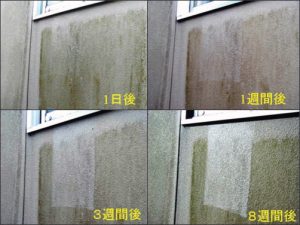